Today is May, 25, 2015. I’m beginning my notes for this post at 9:55 am local time here in the Med, and it’s already uncomfortably hot and humid here in our sailboat. This sort of intense heat zaps my energy and sucks it right out of me, so I’m hoping today’s post won’t end up reading something like “Today I slept all day. The end!”

Speaking of sleeping: My kitties all got up at some stupid early hour this morning, and they were running around like wildcats. I was awakened by one of them taking a broad leap and landing on my head. I have scratch marks on my face to show for that. 🙁

Now the kitties are all sleeping like little black and white angels. Happiness = 4 adorable sleeping cats.

I ended up being more productive than expected today. No sleeping for me — not even a little nap. 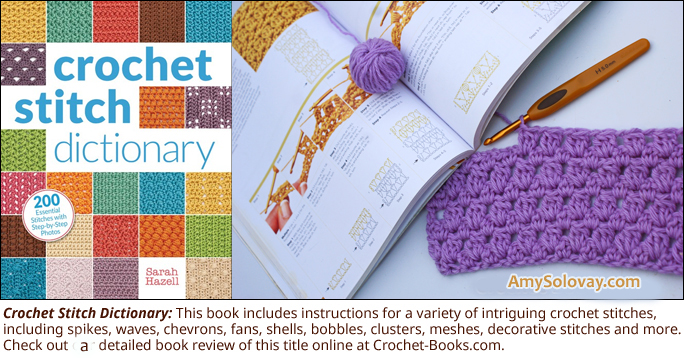 Today I crocheted this swatch of ZigZag Lozenge Stitch from Crochet Stitch Dictionary by Sarah Hazell.

This is an intriguing stitch that I’m interested in trying again, next time in stripes of three different colors.

The short version of these reviews: I love both these books, and highly recommend them. I invite you to check out the reviews if you’re curious about the details of why.

Thanks for dropping by! I really appreciate your interest.

About the Author: Amy Solovay is a freelance writer with a background in textile design. She has been crocheting and crafting since childhood, and knitting since she was a teenager. Her work also appears at ArtsWithCrafts.com, KnittingandCrochet.net and Crochet-Books.com. Amy sends out a free knitting and crochet newsletter so interested crafters can easily keep up with her new patterns and tutorials. If you’re already an Instagram user, Amy also invites you to follow her on Instagram.

So, I’m dusting off this blog and trying again with daily blog posts. I stalled out on doing that for a few months, because I’ve been staying at a marina with unreliable Internet access. I haven’t been able to get online until just a few days ago. It has been so frustrating!

In the past, when I used to blog for a corprorate crochet website, I was able to maintain daily blog posts for a couple of years running. However, since I knew I had unreliable Internet access, I used to schedule the posts ahead of time. I’d usually blog about a month ahead. I’m realizing that’s doable in my particular situation, whereas “Today in Review” style blog posts are not necessarily sustainable for my particular situation. At least, not on a daily basis. Bummer! Because I really like doing them. I’m thinking it over and pondering where to go from here.

I do know this: I’m at the mercy of both the local Internet antenna and the network, which are susceptible to going down for a number of reasons. The network seems to go down a few times a day for no apparent reason, and then the antenna often goes down for longer stretches of time — particularly when it rains or gets wet. It was the same when we were cruising in southern and central California; in Two Harbors, California, on Catalina Island, the Internet tower would go down every time it rained — typically every weekend during the rainy season. They wouldn’t usually fix it until sometime Monday morning or afternoon, which would cause me much anxiety and stress if I hadn’t already scheduled my weekly newsletter to go out. I learned quickly: work ahead. Work far, far ahead.

I’m not sure I want this blog to consistently include bunches of scheduled posts, just for the sake of maintaining a daily blog. That doesn’t make much sense. So I still have some thinking to do about whether to just pick up with what I was doing, or try a different approach.

I did use the down time to begin working on a crochet book, and the book is now nearly finished. I’ll be posting more about that soon. Update 7-9-2019 I decided to scrap the book and post all those patterns for free instead of trying to sell them. But I did resume working on the crochet stitch dictionary.

I’ve also been caring for a disabled cat, in addition to all the other cats I already help to take care of. Poor little baby. I’ll post more about that soon, too.

…was kind of hurried, but at least I got out there. I did:

Today I Worked on:

Today the boat was rocking like crazy all day, making it trés difficile to get anything done. 🙁 And it’s still rocking…

…a cloth tea napkin. It isn’t finished yet; I still have to add an edging. Then I have to complete the set. Thus there will be more napkin-making in my future soon. Maybe. Hopefully. I’ve been known to make one napkin at a time, and then not finish a complete set, and so I have a bunch of oddball napkins hanging around. This time I’m hoping to get an entire set done, but we’ll see how that goes.

…updating my crochet pages at this website; I added a few things to a couple of pages:

If it seems like I got a lot done today, that’s because I stayed up all night working. I am exhausted now.

A cat broke the pressure cooker lid this morning by knocking the whole thing on the floor. This might not seem like a big deal to you landlubbers out there, but it’s the only pot we have aboard our sailboat at the moment. Losing its pressure-cooking capabilities = total bummer. 🙁

…hasn’t happened yet. I’m hopeful that it will, but it’s a little up in the air at this point.

I used to journal every day. I started sometime when I was in junior high, although my earliest journals have not survived (because I shredded them at some point when I was in high school.) When I was in college, I got too busy for daily journaling, so it morphed into once-a-week journaling. Then I stopped journaling when Mike and I moved in together and other things took priority.

I miss journaling. While I would love to go back to it, I’m still finding that I can’t make it a top priority. If I were to devote the same amount of time to journaling that I used to, something else that’s more important would suffer.

Blogging isn’t quite the same as journaling, but I’m thinking perhaps it could be productive and motivating for me to start posting “today in review” style blog posts. Motivating, because if I know that I have to share my accomplishments at the end of every day, it means that I will have to accomplish something worth sharing — something better and more shareable than “snuggled with the cats in bed all day.”

I’m going to give this a try. Can I keep it up? I don’t know. Will I always have something worth sharing? I hope so, but again, I really don’t know. Let’s see how it goes.

this crocheted wreath ornament. The free crochet pattern is available at KnittingandCrochet.net. 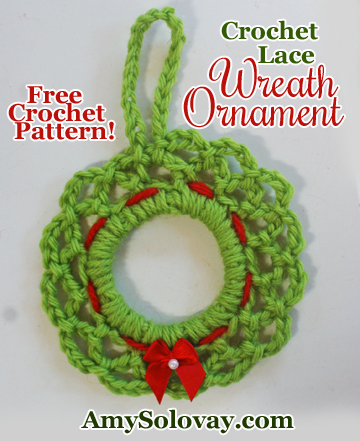 …this list of Christmas patterns to knit and crochet

…two young foxes playing together and chasing each other. They hopped up onto a fence and were running gracefully along; being atop the fence was not an issue for them at all. They were perfectly balanced. I had no idea foxes were so nimble. They were amazing.

My husband and his friends are really into mountain biking. This past August, we took a trip to Brian Head, Utah, so they could ride in a race that was taking place there. I actually took my bike along for the trip too. It was so much fun, even though I fell off my bike a bunch of times and got totally scraped, bruised and sunburned.

Normally when I go on these trips I take a camera, but not a bike. These guys are really experienced riders, and I am not. I do enjoy riding the trails with my husband, but it’s not as much fun for me when he gets together with a bunch of hardcore riders and they decide to ride down really insane terrain. To that, I say, “No thanks!”

I usually have more fun taking photos of them than I would have if I were attempting to ride with them. I took quite a few photos on this Utah trip~ almost 1,000 photos all together. No, I am not going to scrapbook them all. 😉 But I am picking out all my favorites to print and scrap.

It was sooooooooooooo beautiful up there in the mountains, and it was hard to take a bad picture up there. Everywhere I looked, there was gorgeous scenery. Pretty incredible! Utah is just spectacular.

The rider pictured in this scrapbook layout is my husband. For his cycling layouts, I try to keep it simple- definitely no paper lace, ribbons, or Prima Flowers. The truth is that my husband would rather just have his photos stuck in albums. He does humor me with my scrapbooking, but I try not to press my luck and go too crazy with embellishing his bike photos. 😉

Interestingly enough, I’ve found that he seems to like the layouts I’ve been doing lately with Reminisce’s Great outdoors line. The papers are really ideal for this kind of layout — much better suited than the few-and-far-between bike-themed papers that I’ve seen. I do dream about the day when someone will release a downhill mountain biking themed collection, but until then the Great Outdoors line is the next best thing.