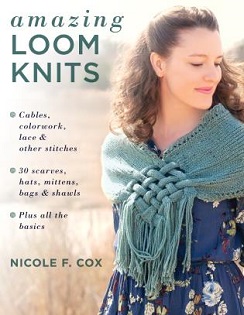 Do you know how to loom knit — or would you be interested in learning how to do it?

I’m in the process of learning how to loom knit. This is a relatively recent endeavor for me. I’m an experienced machine knitter; but, as it turns out, loom knitting is a whole different thing.

I bought my first knitting machine when I was a teenager, and then I expanded my machine knitting skills by earning a degree in textile design in 1997. Then after that, I worked as a knit designer in the textile industry.

I sold my knitting machines before Mike and I moved aboard a sailboat and set sail for distant ports — an adventure I don’t regret — but, now that I am back in the USA again, I sure wish I could have my old knitting machines back.

Unfortunately for me, that isn’t a practical wish.

Mike and I made the decision that we weren’t going to make another substantial investment in old, outdated knitting machines that are difficult to find parts for — which describes the knitting machines I used to own. We talked about the possibility of buying a new, up-to-date machine, and turning it into an actual business rather than a hobby. But after about 2 minutes worth of discussion, we came to the conclusion that we are not well equipped to start a fashion business, or, really, any product-based business right now.

So, machine knitting is not an option for me at the moment. Bummer!

But when I came across some knitting looms for sale at the local thrift store for a couple of bucks, that seemed to me like a worthwhile purchase. The looms aren’t an ideal substitute for a knitting machine, but you’d be surprised at how much you can do with them.

Did you know that you can knit lace patterns, cables and colorwork patterns on humble, manual round knitting looms?

But you can, indeed, make these types of projects, and many others. 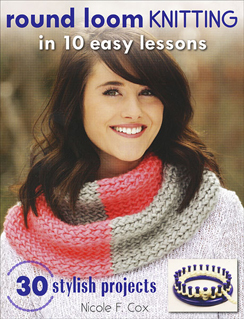 Nicole F. Cox is the author and designer who has actually given me the instructions I need for making the most of simple round knitting looms. Her first book, Round Loom Knitting in 10 Easy Lessons, is the best book I currently know of on the topic.

Nicole recently released a brand new sequel called Amazing Loom Knits. I just began reading it a few days ago. I haven’t yet attempted to knit any of the patterns from the book, but I am so excited about them — these projects are totally gorgeous! And, also a plus, I am learning a staggering amount from reading this book.

I’ll be posting a book review of this title ASAP — but, in the meanwhile, I’ve read enough of it to feel confident in recommending it to other loom knitters. It is excellent.

If you’ve never loom knitted before, I would say, start with Nicole’s first book, Round Loom Knitting in 10 Easy Lessons. If you’ve already loom knitted at least one project, I think you’d be likely to enjoy either book. But if you’re hoping to learn how to knit things that are more interesting than basic jerseys and stockinette stitch, you’re definitely doing to want to check out Amazing Loom Knits. In my opinion, the book definitely lives up to its name.

Today I have been working on updating my page about the woven crochet technique at KnittingandCrochet.net. In the past, I’ve crocheted about one zillion different swatches using this technique. The only woven crochet project I’ve actually finished is a scarf (except I still have to finish the end weaving — which is going to be a challenge).

Most of the woven crochet I’ve done looks really cool — but it doesn’t look cool enough to justify the crazy amount of work it takes to do it. So instead of sharing what I’ve come up with, I keep starting new swatches, hoping to find some elusive and magical combination of stitches. What I’m trying to find is a combination of stitches that will look spectacular, but actually be worth the substantial effort it takes to create a project using this technique.

I’m getting close to that…

So far, the closest I’ve come is with this swatch: 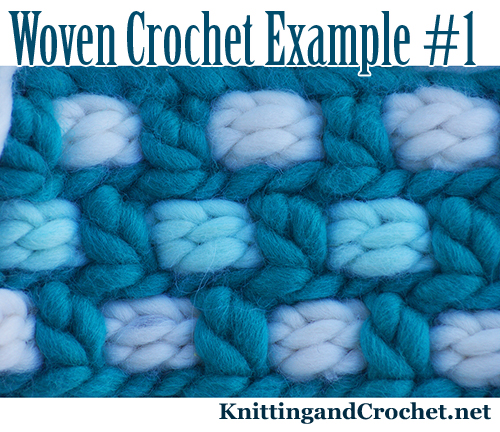 If you want to know how this swatch is made, you can find more details at this page about woven crochet.

This needs re-designing before I design an actual project with it — first of all, because I used yarn that has now been discontinued, and also because my first attempt at this fabric came out waaayyyyyyy too dense and stiff (which you can’t necessarily tell from looking at the picture).

In the actual form you see it, this fabric is practically suitable for making furniture, it’s that dense and stiff. I thought it would make a nice cat bed or basket, but it is so thick that a cat bed or basket would be prohibitively expensive for the average crocheter to make. It would make more sense to create a less dense version of this same sort of fabric.

So, back to the drawing board — but the idea is definitely promising. I think this type of stitch pattern will make a lovely scarf, cowl or pillow. With the right yarn and crochet hook combination, I could also see using it to design other types of projects.

You can see one other new woven crochet example at KnittingandCrochet.net.

I’m still pondering what to do about the scarf. The finished sample I made was far too labor intensive to want to mess around with. Even as I was crocheting it, it was testing my own patience levels. I have more patience than average, so if it took too long for my liking, I’m guessing no one else on earth would want to attempt it. So, I can only conclude that the scarf needs redesigning, too. That’ll be a project for another day — or maybe for never. For now, the scarf will remain in hibernation.

My Current Work-In-Progress Is… 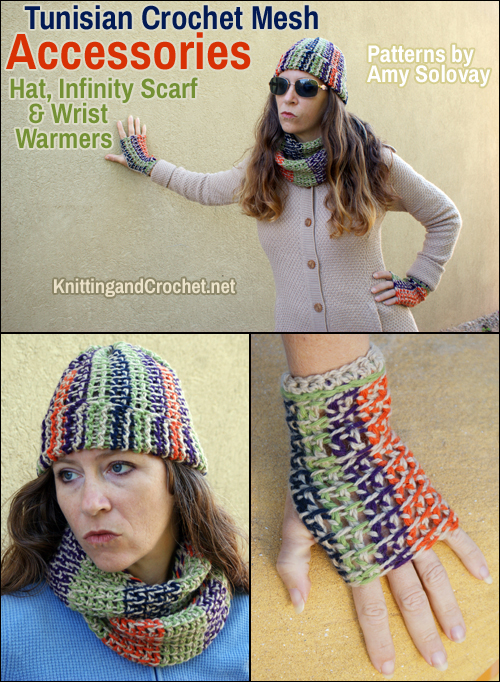 …a revised version of this accessories set.

The set you see here in the picture is one I made awhile ago. At the time, I held back on releasing the pattern for a few different reasons.

For starters, the math is a little wonky with these projects as is. Not only that, in real life, each of the pieces is a little too small. I’m a little fuzzy on remembering the details of why, but I think it might be, at least in part, because I stretched them wayyyy too aggressively for blocking. Then after the blocking was complete, they relaxed more than I expected them to. Well, duh, of course they were going to do that. In hindsight, that seems obvious.

The instructions I wrote down at the time would more than likely have you all duplicating the same mistake, if you were to work that pattern. Yikes.

Plus, the main color in this design is a hand dyed color, and the others aren’t.

That’s a few too many problems for me to want to release the pattern exactly as is. But, I’m working on a simplified version that I think is going to be much better. I LOVE IT!

I made a similar hat and fingerless gloves in only 2 yarn colors. In the photographs above, the colorful colors are all Cascade 220. I’m redoing the set so all the yarn colors in the project will be Cascade 220.

The hat and fingerless gloves have used up less than 2 full skeins of yarn, and there’s enough left over to make something else small. I’m still contemplating what I want that something else to be — perhaps a cell phone pouch or a headband. Would you have a preference on that? If so, I invite your comments below. 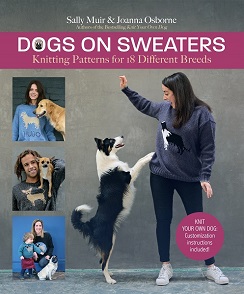 Dogs on Sweaters, a knitting pattern book featuring dog-themed projects by Sally Muir and Joanna Osborne. Trafalgar Square Books is the publisher of this title.

Trafalgar Square Books has an adorable new book available called Dogs on Sweaters. I just posted a book review of this title at KnittingandCrochet.net. The short version of my review: Thumbs up! The book is absolutely charming. If you knit, and you love dogs, I think you’re likely to enjoy it.

You: So, Amy. I hear you’ve started a balcony garden. What are you growing this season? 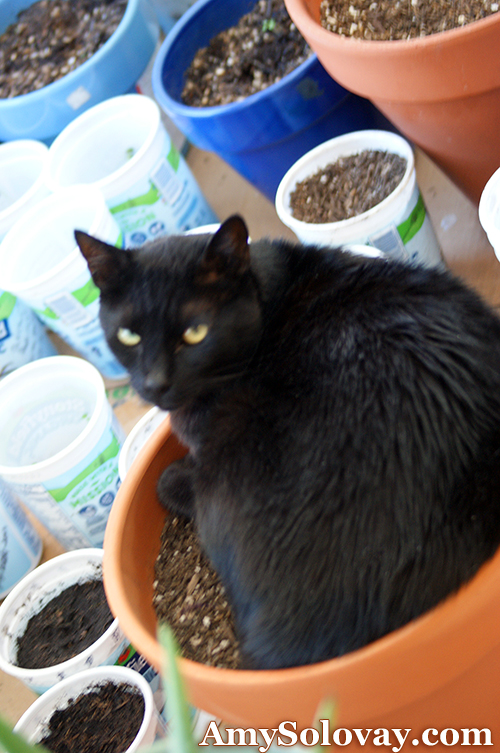 My Balcony Garden, Complete With Cat

OK, the honest truth is, I’m attempting to grow herbs — cilantro, dill, holy basil and chives — plus some strawberries. But so far, things with the balcony garden have not gone all that well.

A couple of reasons. The first is because every time a seed has germinated, this naughty little nuisance of a cat has attempted to eat it.

Mike and I know a lot of cats, because we’ve spent substantial amounts of time in Greece and Israel, two countries that have high feral cat populations. We’ve determined that this particular cat, Inky, is the fourth most annoying cat on planet earth. Remind me some other time to tell you about the 3 spectacularly annoying cats ahead of him in line for that distinction.

Anyway…aside from catnip, cats aren’t supposed to like herbs, are they?

But Inky likes herbs. He has a particular affinity for dill, but he’s not picky. He’ll attempt to eat any herb that germinates in my balcony garden.

I came to the conclusion that planting catnip was not optional. I planted some of it in hopes of deterring the cat from eating everything else. The catnip just germinated a couple of days ago. So far Inky has shown zero interest in it, despite me showing it to him repeatedly. So much for that idea…

I suppose what I really need to do is get some cat grass seeds. I used to grow cat grass, and Inky adored that.

Reason #2: I’m not getting many seeds germinating to start with, because I’m planting old seeds that were exposed to heat. Bummer. But I’m working with such a small space that hopefully, even with a low germination rate, I can get enough plants growing to fill the few flower pots I have available. Wish me luck with that…

Mike has some freshly baked organic bread in the oven as we speak.

…hasn’t happened yet. I was really hoping to go out for a walk with the family this afternoon — but, would you believe, it started snowing. That’s Brian Head for ya. It snows a lot here.

So, that’s how my day is shaping up. I better wrap this up — gotta go get the plants inside.

About the Author: Amy Solovay is a freelance writer with a background in textile design. She has been crocheting and crafting since childhood, and knitting since she was a teenager. Her work also appears at ArtsWithCrafts.com, KnittingandCrochet.net and Crochet-Books.com. Amy sends out a free knitting and crochet newsletter so interested crafters can easily keep up with her new patterns and tutorials. If you’re already an Instagram user, Amy also invites you to follow her on Instagram.