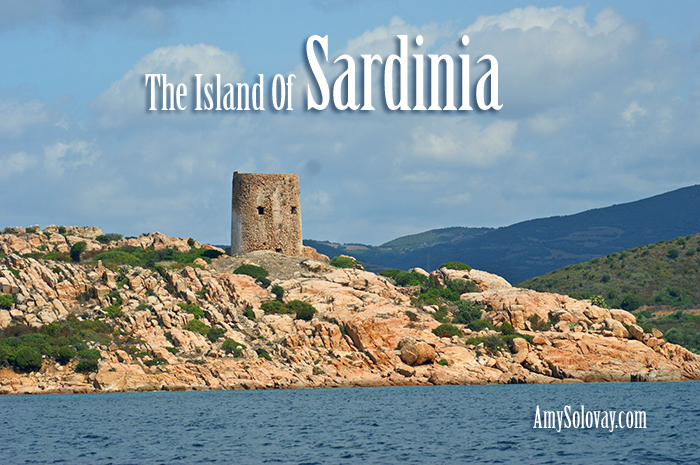 In this picture, you can see one of Sardinia’s most fascinating architectural mysteries — a Nuraghe. There are somewhere around 7,000 of these Nuraghi (tower-fortress structures) on the island of Sardinia.

Sardinia is what we call Italy’s second largest island, but it isn’t what the locals call it. They refer to their beautiful island as “Sardegna”. The region’s official name is Regione Autonoma della Sardegna. Whatever you call it, this island is home to some of Europe’s loveliest beaches, finest sailing environments, most impressive flocks of sheep, tastiest sheep cheeses, most distinctive wines and most intriguing history.

Boating and Sailing Around Sardinia 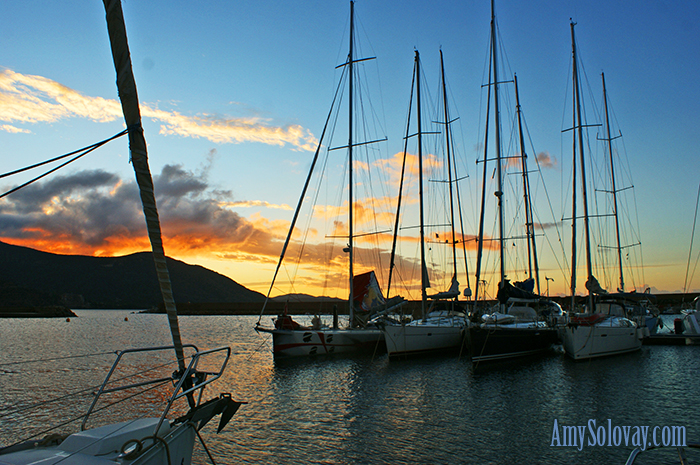 Sunrise over Marina Teulada on the island of Sardinia, Italy

Marina Teulada on the island of Sardinia, Italy 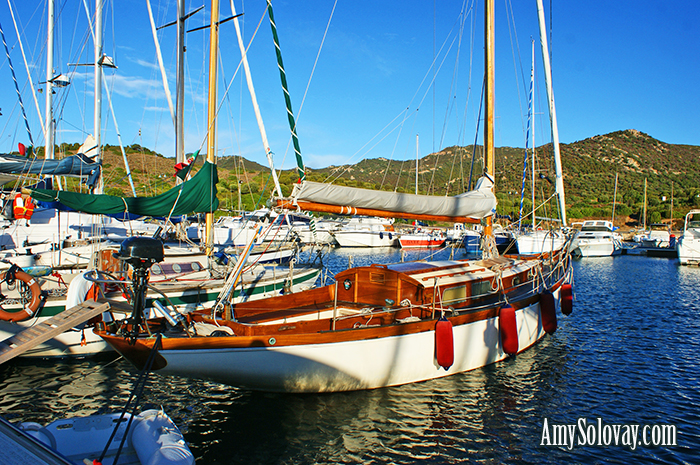 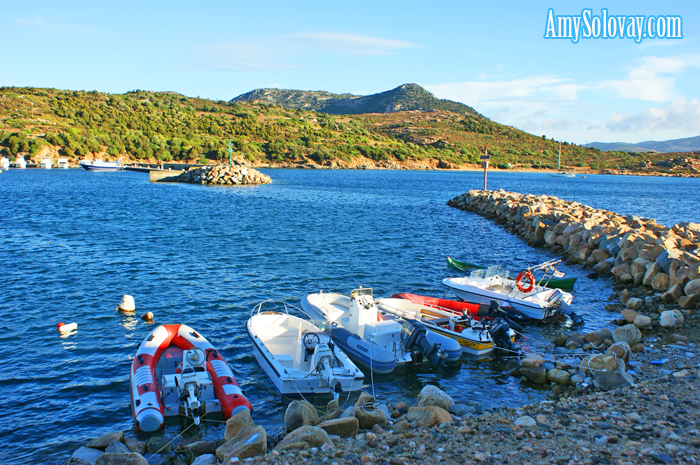 Small boats docked in Marina Teulada on the island of Sardinia 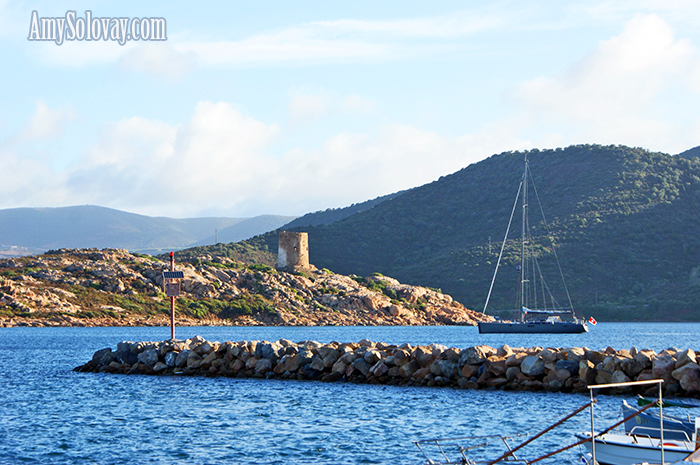 The Free Anchorage Outside Marina Teulada Off the Coast of Sardinia, Italy

My husband, Mike, and I were liveaboard cruising sailors at the time we first visited Sardinia. We had just crossed the Atlantic in our 34-foot sailboat, and we were making our way across the Mediterranean Sea. We hadn’t planned to stop in Sardinia; we’d actually been shooting for Sicily.

Our boat got rocked by a gnarly storm, so we decided to forget Sicily and seek shelter in Sardinia. In hindsight, we’re glad things worked out that way. Thanks to that storm, we discovered one of our favorite sailing destinations on earth.

Once the storm broke, Sardinia proved to be the most amazing place to explore aboard a sailboat. If you’re a cruising sailor, Sardinia is definitely a place to consider putting on your bucket list of must-experience destinations.

We can also highly recommend the hospitable and comfortable Marina Teulada. The marina staff we spoke with were fluent in English and extremely nice to deal with.

However, if you decide to travel to this particular marina by boat, do be aware that Teulada Marina does not offer the usual assortment of bars, restaurants and shops you might be used to finding in other marinas. Furthermore, walking to the city of Cagliari from the marina is pretty much out of the question — even if you are in excellent physical condition and used to walking long distances. We attempted it, and failed. There are no sidewalks, and it is a dangerous walk.

Happily, there is a bus that makes the trip there, and taxi service is also available. The bus is the more affordable option. However, if you are trying to re-supply, you’ll probably find it easier to take a taxi. We also — and this is a true story — had an offer from one of the other boat owners to lend us his car keys so we could drive into town. Our jaws just about dropped with amazement at that. He and his wife also cooked dinner for us while we were there. So, if I say that the people we met in Sardinia are some of the most hospitable people on earth, please understand that it is not an exaggeration. 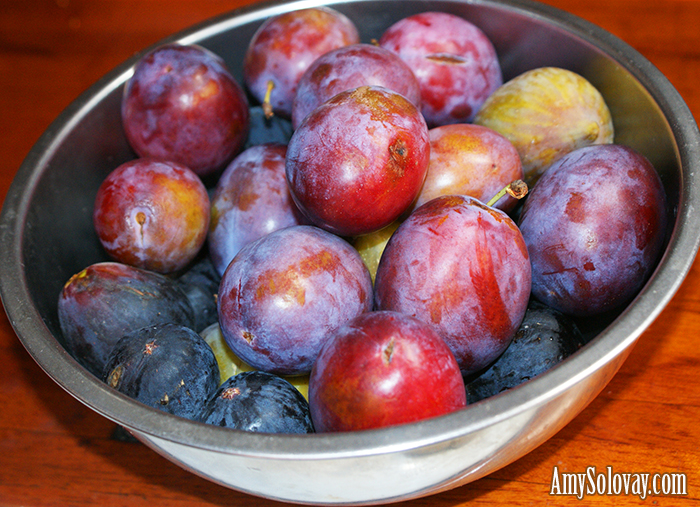 Plums and Figs From the Island of Sardinia in Italy

Our experiences with dining in Sardinia were 100 percent positive.

Under ordinary circumstances, Mike and I stick to an organic diet. For us, traveling brings an extra set of apprehensions: Will we be able to find organic food? And, if not, will the food we eat make us sick?

In this case, we need not have worried. While the food we found on Sardinia was not certified organic by any recognized certifying body, it met our standards for being processed without chemical pesticides, preservatives and added junk — and it was amazing.

Maybe we got lucky. While we were on the island, we bought most of our food from a farmer who came to Marina Teulada to sell produce. That particular farm was apparently farming using organic practices.

Or maybe it wasn’t luck. Maybe that’s just how they ordinarily do things on the island. This wasn’t totally clear to us.

Sardinia has recently attracted global attention because it is home to a high concentration of people who live to be over 100 years old — “centenarians”. Clearly, significant numbers of these people are living lifestyles healthy enough to enable long lives.

While I didn’t get the opportunity to travel around the entire island to experience the available cuisine in its entirety, I am guessing that Sardinia probably offers a better-than-average level of access to unprocessed, chemical-free food.

Sardinia is the crossroads, so to speak, between Italy, Spain and the African coast. The region’s cuisine is influenced by all the regions around it. You’ll find dishes that are unique to the island, some that are wholly Italian, and others that are overtly inspired by African, French or Spanish cooking.

On the coasts, seafood is the typical fare on restaurant menus. Further inland, meat and poultry tend to dominate. Fruits and vegetables are in abundance on the island.

A typical Sardinia breakfast consists of coffee and a croissant.

Pastorino Sardo Cheese Purchased in Cagliari on the Island of Sardinia

One of the many unique and interesting things that distinguishes Sardinia from other places: The island has its own indigenous species of sheep, known as Sarda Sheep. I did try the sheep cheese, and went back for seconds — and thirds. And I’d cross the Atlantic again to have some more of it, without even thinking twice. It is that good. 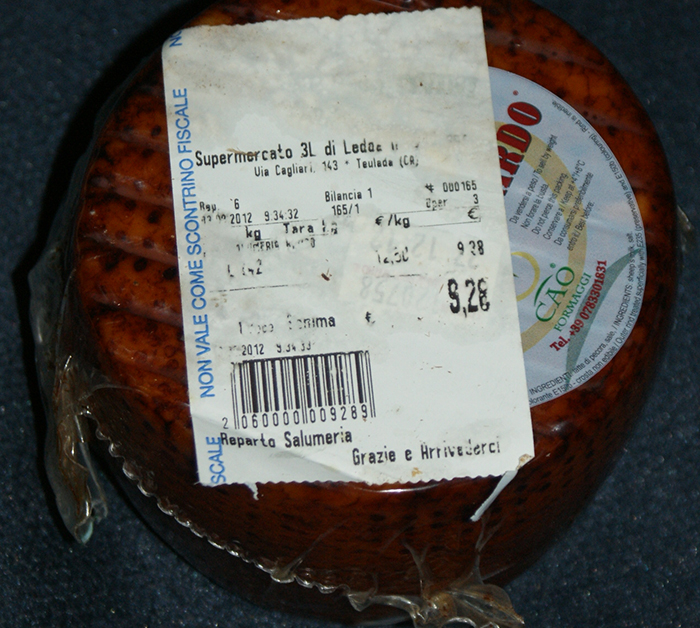 To our great frustration, someone at the market where we bought our cheese had placed a sticker over the cheese label. We like being able to read the ingredients on our food. 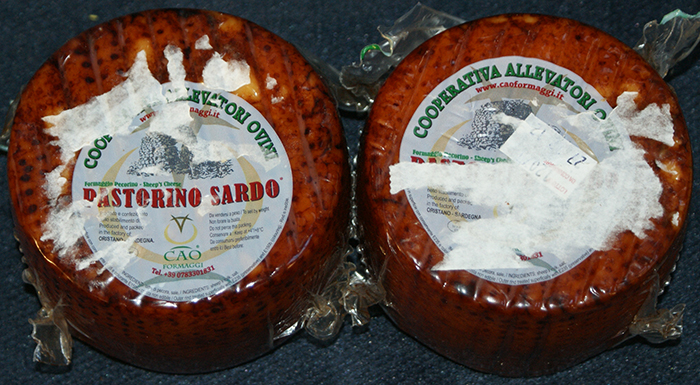 So, I spent a precious half-hour attempting to peel the labels off the cheese. As it turns out, the only ingredients in the cheese itself were sheep’s milk and salt. The rind has preservatives and artificial colors — but you don’t actually eat the rind. The cheese was AMAZING! 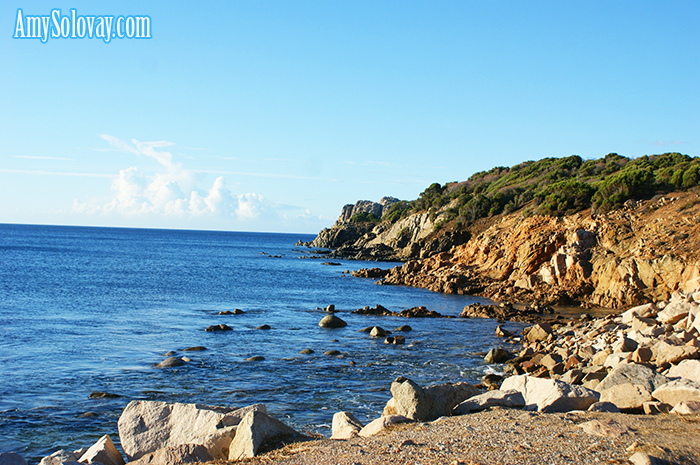 Sardinia’s Beaches Are Some of the Lovliest in All of Europe.

Sardinia’s captivating beaches are her main attraction. They’re a primary reason you’d choose to visit this particular island over another.

When to Visit Sardinia

If there’s one thing that will influence your island experience the most, it is your choice of when to visit the island. If you want to experience all the island has to offer — all the restaurants, shops, cafes, nightlife, campgrounds, activities, everything — you should definitely choose to travel in July or August.

If you’d prefer to experience the island in the off season, you might be pleasantly surprised to find that many of the beaches are deserted — or nearly so. You might get to have one of the world’s most exquisite beaches almost completely to yourself. But, there’s a downside. You might also find that the shops, cafes and restaurants are mostly closed — and you might have to go out of your way to find the few that remain open.

If you do travel to Sardinia in the off season, in our experience, your odds of having a fantastic experience are best if you go to the south side of the Island. We visited Sardinia’s south side in late August through early September. Teulada Marina was lively at that time, and we enjoyed dining out in Cagliari. The beaches were empty. Some, but not all, of the city’s businesses were closed by the time we made it to Cagliari in early September.

We Highly Recommend Traveling to the Island of Sardinia

Overall, we would highly recommend taking a trip to Sardinia. The people are delightful. The beaches are heavenly. The cheese is unlike anything else I’ve ever experienced (and I sampled a whole bunch of truly exquisite cheeses in the Mediterranean). BUT, I would also highly recommend studying up on your Italian before you visit — because your experience in Sardinia will be much richer if you are able to communicate well.

I would also recommend visiting during July or August if you are able to, to ensure you’re truly able to make the most of all the island has to offer you.